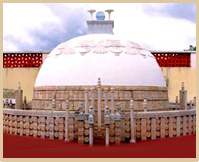 Amaravati Stupa, Andhra Pradesh
The Amaravati stupa, which is also known as Mahachaitya Stupa, has the privilege of being the largest stupa(95 feet high) in India - the birthplace of Buddhism. Built during the 2nd century BCE, the stupa was discovered by a British archaeologist, Colonel Colin Mackenzie in 1797. The stupa was earlier a simple structure with limestone crossbars and simple carvings, but when renovated by the Satavahana rulers, became a highly marked architectural monument.

The capital of later Satvahana rulers in South India in the pre medieval era, Amaravati is situated on the right bank of the river Krishna in Andhra Pradesh. Amaravati, which was also known as Amaresvaram, is a home to best known 2000 years old Buddhist relics, which make the place an important pilgrimage for the Buddhists. The place is also identified as Dhanyakataka by several scholars, who connects Amaravati with the origin of many Tantric teachings especially, Kalchakra.

Amaravati can be reached by roadways as taxis and buses are available from Guntur(32 km away) and other places of the state to Amaravati. The nearest railheads are at Guntur and Vijayawada. Both the railway stations are well connected with all the parts of Andhra Pradesh, Bangalore, Kolkata, Mumbai and New Delhi. If opting for airways, the nearest airport is at Vijayawada (82 km).

October to February. It is advisable to avoid the summers due to extensive heat.
A visit to Amaravati in January 2006 can be a dream come true for many as His Holiness the Dalai Lama has consented to bestow 13 day Kalchakra gathering in Amaravati.

© 2012 Buddhisttour.com All Rights Reserved. ( A Unit of Frontiers Beyond Tours Pvt Ltd )